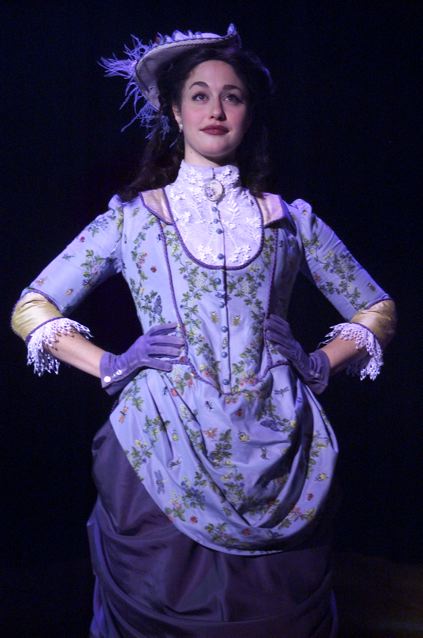 IRVING – These days, you don’t have to have great songs to make a musical – just look at The Producers. The essential thing is a strong story, well told. On Saturday, Irving’s company devoted to new or seldom-performed musicals opened Sundown, its ninth world premiere in the last six years. Sundown has some great songs. In fact, Peter Link’s score may be Lyric Stage’s strongest discovery to date.

Fortunately, it also has one of the best stories from the Old West, the gunfight at the OK Corral in Tombstone, Ariz. Joe Bravaco and Larry Rosler have compressed it into a manageable package for the theater, and Mr. Rosler’s lyrics, though seldom memorable in their own right, push the story along.

Doc Holliday (played by Kevin Varner) occupies center stage in this telling. As the curtain rises, Doc has decided to give up gambling and return to his native Baltimore. But his old pals the Earp brothers show up and lure him into staying – even after he has met a woman he wants to take back East (Gina Biancardi).

For the first half-hour, Sundown inspires fear that it’s one of those competent musicals that don’t give their characters reason to sing rather than talk (like Broadway’s current Sweet Smell of Success. The device of having a woman in black(Candace Evans) represent Doc’s obsession with death doesn’t quite work either.
By the time the fifth of the 17 songs rolls around, all doubts are banished. The second half of the first act provides one good tune after another, especially the title number right before intermission.

It helps that director Cheryl Denson has cast the show perfectly. Each of the actors in the three rival families has an individual look, moves comfortably and can sing. Steve Barcus plays Wyatt Earp as a bantam cock out for glory.
Sundown is really Mr. Varner and Ms. Biancardi’s show, though. This role establishes her among our top musical leading ladies, even though the script’s motivations are sometimes far-fetched and the performer’s hairdo is way out of period. Mr. Varner is terrific in his big moments, attacking his song “Sundown” with emotional power and fine pipes. He doesn’t always look comfortable when just standing around, though.

A week or two more of rehearsals would probably have solved that problem. It might have given the designers and technical staff time to polish up some things like some crude lighting cues. Giva Taylor’s costumes, though, look perfect and establish a new standard for Lyric Stage.