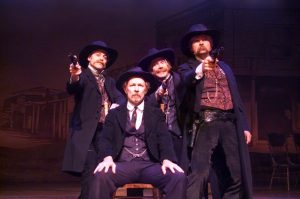 The Barter Theatre’s currently running East Coast premiere of the musical play Sundown is a rollicking, tuneful re-telling of the Old-West tale of the gunfight at the OK Corral. The challenge of this enterprise is to bring a fresh and engaging approach to a story so well-known as to have become a part of mythic Americana. Joe Bravaco and Larry Rosler’s script, Peter Link and Rosler’s songs, and Richard Rose’s staging succeed in doing so by borrowing from several models in roughly equal parts: the traditional stage musical, the ancient Greek myth, the Western movie, and a Bud Light commercial.

As in all good musicals, the songs consistently entertain, illuminate character, and advance the story. With a cast of nine men and only two women, there is, predictably, quite a bit of “rousing” male singing. But Kathryn Foster (as Kate Fisher) uses a rich, country-style voice in her solo opportunities to create some of the show’s most moving and powerful moments. Musical Director Wm. Perry Morgan effectively creates a Western atmosphere with guitar and piano. But I did miss the pleasure of being able to see the musicians, either on stage or in the pit. Sundown retells the events which occurred in Tombstone, Arizona, in 1881, not as history, but as myth, and that with an original twist.

Wyatt Earp becomes a largely comic figure – drunken and infantile. Derek Davidson in this role effectively amuses with wild eyes, lunging movements, and whiny snarls. Sundown’s hero is the multi-dimensional character of Doc Holliday, played with riveting intensity by John Hardy. Holliday finds himself, like a Wild-West Sisyphus, caught in a cruelly ironic situation, and Hardy exploits his character’s introspective frame of mind with impressive dramatic and musical performances, including a hard-edged, thoroughly engrossing rendition of the title song at the end of Act One. From the B-Western movie, Sundown borrows several stock supporting characters. Each of the bad-guy members of the Clanton gang has his shtick — one is wily, one is naïve, one is hot-headed. The (relatively) good guys, Wyatt Earp and his brothers, are likewise stereotypical, as are the weak-kneed sheriff and the cynical saloon temptress.

The Western film format contributes visual elements as well. Cheri Prough DeVol’s open stage design with movable set pieces features Arizona colors and a nicely rendered background projection representing a Western street. And (not surprisingly, given the show’s title) there is at times a beautiful sunset of the sort into which horse-opera heroes frequently disappear. Amanda Aldridge’s notable 1880’s costumes feature long overcoats, frock coats, gun belts, holsters, and a couple sets of clanking spurs, items normally only seen at one remove on TV or the silver screen. And yet another reminder of the cowboy pictures is a generous use of gunfire from ubiquitous pistols. Finally, by my reference to the model of a Bud Light commercial, I mean that a sly, roguish humor energizes the dialogue and action of most scenes. A significant part of the fun resides in Rose’s choreography. It has just enough comic bravado and rowdiness to make it a credible employment for the he-man gunslingers who largely people Sundown. For example, one of the dance numbers features pistol-twirling, and another uses the gunfighting cowboy’s distinctive leg twitches to excellent comic effect.

There may of course be legitimate moral reservations about legends of the Old West in which problems are solved with six-shooters. But at least for me, the high theatricalism and the overlay of humor largely excuse Sundown from the world of ethical discourse and make it an enjoyable musical variation on an archetypal story.