Posted on Mon, Apr. 22, 2002
By PERRY STEWART
Special to the Star-Telegram 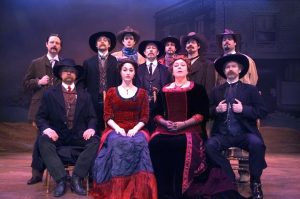 IRVING – Ah, the joys of live theater: the roar of the crowd, the smell of the greasepaint and the gunsmoke …Yep, gunsmoke. The actors at Lyric Stage are packing real six-shooters. That’s only fitting for a new musical that climaxes with the gunfight at the O.K. Corral. In Sundown, authors Joe Bravaco and Larry Rosler focus on John “Doc” Holliday, the Baltimore dentist who moved to Arizona for his health and became a legendary gunfighter. His saga works well as a musical, Doc himself being worthy of an opera.

The best singers in producer Steven Jones’ premiere staging are Kevin Varner as Doc and Gina Biancardi as a version of Katie Elder. Recall Biancardi’s maternal figure in Allegro and you’ll appreciate her acting stretch here as a bawdy belle always ready for One More Drink. That number leads to a hangover of Olympic scope, and Biancardi plays it down and dirty. She fires the show’s first big solo salvo on Bridges, tops herself with Prisoner, then joins Varner on the soaring Another Time. Bradley Campbell is both menacing and comical as Ike Clanton, accustomed to calling the shots in Tombstone.

When the U.S. marshal, Virgil Earp, installs his brother Wyatt as sheriff, the Clanton clan regards that as a Fly in the Ointment. Steve Barcus is a peppery, revisionist Wyatt Earp. Candace Evans is compelling in one of the script’s better twists: an elegantly sexy Grim Reaper. Jon Morehouse is charmingly droll. And Chip Wood is solid as an evil Clanton henchman – this despite an opening-night mishap that this actor will probably remember as The Holster From Hell. Cheryl Denson directs with a feel for pacing and an eye for the heroic tableau, which designers Susan A. White and Wade Giampa achieve. Musical director Nyela Basney’s small combo can’t do justice to Peter Link’s score. (A fiddle would work wonders.) Perry Stewart