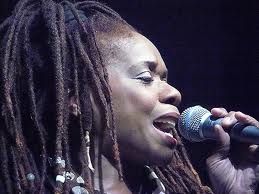 Goin’ Home – On Heaven and Beyond – A Gospel Cantata

As Alexander Pope once said, “To err is human; to forgive, divine.” We all make mistakes, and although the surety of forgiveness in the Great Beyond is a comfort to lean on when we’re feeling down about ourselves, it is also important to do all we can to reverse our errors in this life, too. This sentiment is boldly delivered in the upbeat, funky tune We Fix It, subtly punctuated with percussive elements taken from the sounds of construction sites. The song is part of Peter Link’s album Goin’ Home, a joyful, sometimes funny, sometimes poignant, and always musical exploration of the transition from this world to the next, a celebration of eternal life.

Catherine Russell is a native New Yorker, born into musical royalty. Her father, the late Luis Russell, was born in Panama, emigrated to New Orleans and then to Chicago and New York City, becoming a legendary pianist/bandleader/arranger/composer, and Louis Armstrong’s long-time collaborator and musical director. Her mother, Carline Ray, was a pioneering bassist/guitarist/vocalist and holder of advanced degrees from Juilliard and Manhattan School of Music, who performed with International Sweethearts of Rhythm, Mary Lou Williams, and Ruth Brown. Not surprisingly considering her pedigree, Catherine Russell is a one of a kind musician and vocalist. A graduate of American Academy of Dramatic Arts, Catherine has toured the world, performing and recording with David Bowie, Steely Dan, Cyndi Lauper, Jackson Browne, Michael Feinstein, Levon Helm, Paul Simon, Rosanne Cash, Carrie Smith, Toshi Reagon, Wynton Marsalis, Dr. John, Joan Osborne, Vince Giordano, and many others, appearing on over 200 albums.