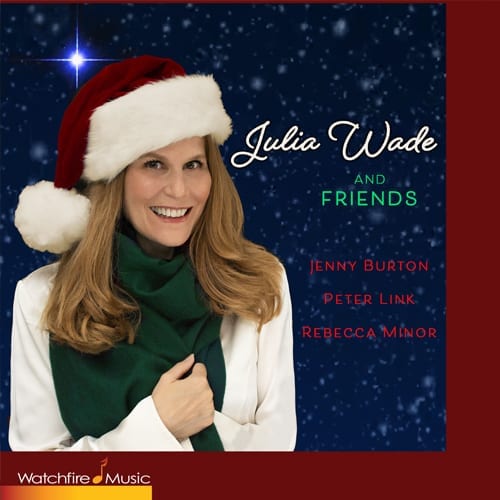 This being Julia Wade’s 14th Album, we’ve long been talking about doing a Christmas Album.

What successful artist does not have a Christmas Album? So, this year we decided it was about time.

June 1, 2019 we began. I started by looking for classics that we thought we might record with some form of new originality. The idea of Jingle Bells as a waltz excited me and so I started with that. The song is in the Public Domain, so I took some liberties with the Lyrics and, along with the new and more relaxed meter of the waltz, made the song about simply a midnight ride through a winter wonderland in a horse drawn sleigh enjoying the beauty of an old-fashioned moment. It worked wondrously and I asked Jenny Burton and, of course, Julia to join me in the sleigh and take the ride.

After that, the songs started coming pretty fast – some classics and many original ideas drawn much from my childhood memories and my own weird imagination.During the months of June, July, August and September it was Christmas every day around the Link Household.

What would a Christmas Album be without bells?

Fortunately, I have both a box full of hand bells, sleigh bells, and windchimes down in our basement to draw from as well as some gorgeous synthetic bells in software, so if you don’t like bells, this album may not be for you. :o)

Julia and I both wanted to work with some other singers on the album as guest artists, so we invited two very special women who we simply adore – Rebecca Minor and Jenny Burton. They both bring their best to the album and allow us to do trios and quartets as well. We are four distinctly different voices, but all most sensitive singers, so finding the blends on several of the songs was both great fun and most challenging.

This is definitely an eclectic album. But then again, it’s an album for the whole family.

And, after all, Christmas is a time for everybody, so the music reflects that. All the years working in the theater have helped me to adapt as an orchestrator and a composer to a wide variety of music. I’ve written Russian, Greek, Reggae, Semi-classical, R&B, Bluegrass, Jazz, etc. all under the title of American Music. After all, we are the world’s great melting pot. So why not keep it that way for Christmas.

Julia and I think that Julia Wade And Friends – A Christmas Album is one of our best works together.

We’re excited to share it with you. Of course, my favorite part of the album is simply Julia. When you get done listening to this album just see if you can recall all the different Julias you got to know in the process. This is a singer at the top of her form and handling everything I throw at her with spectacular success. Both the great range of her instrument and the great range of her commitment to the lyric come into play before our very eyes and ears. She is simply one helluva singer. I’m fortunate to be able to turn to her at breakfast and say, “Here, try this one on for size.”

Visit the Album Page and Listen to Samples, Download and Ship Julia Wade and Friends!

*This is a re-post from Peter Link’s blog, Sparks from the Fire.

3 thoughts on “Julia Wade And Friends – A Christmas Album”