Sundown Home
About the Creative Team
Listen to the Music

Read the Reviews
View the Show Gallery
Contact to License

“More tuneful and emotionally resonant than many shows to hit the Great White Way in recent memory."*

Listen to Samples from the Sundown Score in this Playlist: 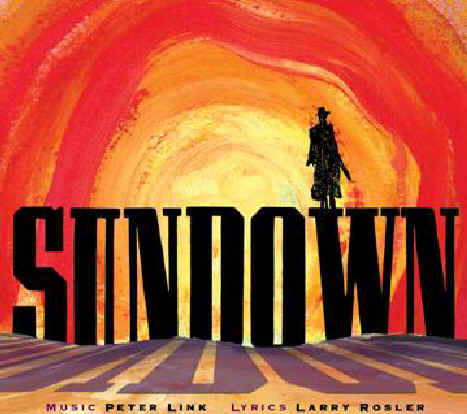 Read Reviews for the Studio Cast Recording of Sundown

* “The biggest surprise of the year . . . more tuneful and emotionally resonant than many shows to hit the Great White Way in recent memory . . . an incredibly strong and highly listenable album.” —Jonathan Frank, “Sound Advice,” TalkingBroadway.com

“The music that I came to know as ‘country and western’ is now simply called ‘country’—but what do you call this country musical in a western setting? Darned good, that’s what . . . Just as that ’50s TV series sang that Wyatt Earp was ‘brave, courageous, and bold,’ so is this score.”—Peter Filichia, Newark Star-Ledger and TheatreMania.com

“[Sundown] approaches its subject with a musical earnestness that can’t help but affect the listeners. Peter Link has written a score that mixes to beautiful effect country-western strains with a pop sensibility . . . Sundown has gown richer with each  subsequent listen. I eagerly anticipate the chance to encounter the musical on the stage.”—Andy Propst, XM Radio

“Another surprise greeted me when I opened my advance copy of Sundown . . . The score, with music by Peter Link, lyrics by Larry Rosler, plus book by Rosler and Joe Bravaco, is lovely . . . I would hope musical theatre producers around the country pay attention to this piece.”—Chris Curcio, Broadway’s Biggest Hits.com

“A cast of experienced stage performers delivers a string of country-flavored melodies with élan . . .Steve Blanchard is Doc, Patrick Ryan Sullivan is a stormy Wyatt, and the sumptuous Judy McLane provides the loveinterest as Kate . . . a project worth further investigation.”—John Kendrick, Musicals 101.com

“Brings the listener back to the Wild West on a fun, heartfelt, and emotionally moving journey. Sundown captures the  excitement, danger, and beauty of the Wild West in a time when legends were born.”—Ryan Emmons, New York Theatre.com