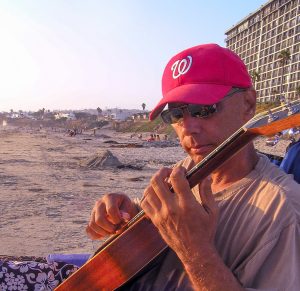 Songwriter and producer Alan Brian Curtis has had a rich career working as a songwriter, vocalist, guitarist and guitar synthesist. In addition to writing, producing and recording his music, he heads up the Ben Evolence Band, offering up a spicy blend of hot Pop music fused with rhythmic elements of Latin and World music elegantly tricked out with a touch of Jazz.

Alan’s influences include the great vocal harmonies and stylings of R&B, Gospel and Soul genres and the entire body of Latin and Brazilian rhythms.

Alan Curtis is an avowed beachnik residing on the island of Oahu, HI. The natural beauty that abounds in every direction provides a continuous source of inspiration for him. Often that inspiration will find artistic expression through the music he writes and records in his studio. At least on those days that he is able to resist the lure of sun, wind, and sea.

As a youngster growing up just outside of Washington, DC, he was introduced to Afro-Cuban rhythms and music by many of the Cuban refugees whom he befriended. These happy, infectious rhythms and harmonies made a lasting impression and usually find their way into many of his songs and arrangements. Alan has both lived and toured in Latin America as well, which has served to further broaden his musical pallette.

His immediate plans are to continue learning to love God with heart, mind, soul, and strength and to love neighbor as himself. He is very excited to have an opportunity to bless others through music. From the most remote archipelago on the planet, he is able to broadcast his music to the remotest parts of the planet and everywhere in between. The irony is not lost on him.

Every songs sooo peaceful and soulful at the same time. Love it man!

Always puts a smile on my face to hear your music

You're a master man! A muso of musos! I feel so inspired listening to your creation

Our December 2013 Editor's Choice Award goes to Alan Brian Curtis for his divine remix of an extremely popular Christmas song "Joy To the World", combining joyful vocals and a jazzy fusion of Brazilian Samba rhythms and indigenous instruments -- spreading holiday love all around the world... We try to feature the most original music with these awards, and we believe Alan's enthusiastic cue more than meets the test