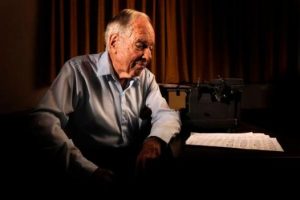 Austin C. Lovelace, D.S.M., AAGO. Member of ASCAP, Fellow and Life Member of HSUSC, noted hymnologist, has over 1,000 titles published by 40-plus publishers. DARCEY PRESS publishes 64 sacred solos, all of which link inspiring texts to settings that are musically satisfying and accessible, eminently singable and congregation friendly.

Longtime member, ASCAP. Composer of over 1,000 compositions published by over 40 publishers. Organist for the 2nd Assembly of the World Council of Churches, 1954. Dean of the first North Carolina Chapter, AGO. Chairman of the 1968 National Convention, AGO, in Denver.

Two terms on the National Council, AGO. Co-founder, with Tom Matthews, of the North Shore Chapter, AGO.

From a letter Austin wrote to Carlton (Sam) Young:

“…In the 90’s I wrote dozens of sacred solos for Darcey Press, primarily a publisher for Christian Science singers. (They never have a choir!) Also in the 90’s and in the 2000’s it was more vocal solos and scores of organ preludes on hymn tunes…When I finally counted all of this up there were more than 1,000 pieces published…”

God blessed my Dad with many musical talents which burst forth during his lifetime in ways that seemed to surprise only him. And as we all discovered, a twinkle in his eye often meant a splendid pun was forthcoming. He was my Hero and Inspiration. --Barbara Lovelace Williams, Denver, CO

I have appreciated having Austin Lovelace's delightful style in my music library as a modern, melodic composer. I recently sang "The Lord My Shepherd Is" (Ps 23) at The Mother Church, where "Sing to the Lord All the Earth", "The Love of God", and "From Sense to Soul" have also been sung. I particularly enjoy singing "Have You Not Known?", "You Crown the Year with Goodness", "Faith Is", and "An Everlasting Love". Lovelace has many interesting settings I look forward to learning.

Austin had excellent musical taste, and a nearly infallible ear for what is right. He ranks with the best song writers, including Cole Porter or Ned Rorem in this regard. His selection of authors, and mostly unknown authors, was always at the highest level. I would add that Austin was a musician's musician and a hymnologist's hymn writer. His encyclopedic knowledge was legendary. He will never be equaled or replaced, at least not anytime soon.

50-plus years ago, I met Austin by serving as Publicity Chairman for an American Guild of Organists Regional Convention which he chaired. It continued with him critiquing solos I wrote, and with DARCEY PRESS publishing solos and hymn tune keyboard compositions he wrote, many at my request. An approximate total of Lovelace titles DARCEY PRESS has published: 64 sacred solos, 3 carols, 14 secular songs, 41 hymn tunes, and 58 organ solos based on hymn tunes. For the four book set, 120 More Musical Gifts, he created 18 sets of variations plus a 15 page index of text associations for the 120 hymn tunes included. He wrote songs for the New Songs for New Singers collection, and he even provided a page of limericks (including seven of his own) as text options for my song, "Limericks". Austin's musical sharing was extraordinary. He was a joy to work with through numerous projects; his chuckles graced all conversations. His sacred solo texts are solidly grounded in scripture, words and music conjoined superbly. DARCEY PRESS is delighted to have requested so many compositions, and is proud to be one of his many publishers.