View cart “God Is Our Refuge” has been added to your cart.
See All Digital Sheet Music by Frank La Forge 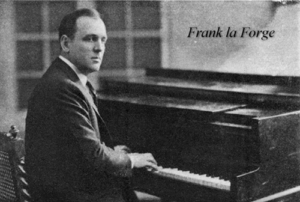 “[Frank] La Forge composed around 40 songs for voice and piano in the years between 1906 and 1940, as well as a few piano solos, choral works, and at least one solo for violin and piano. Some of the songs are sacred … The songs are known for their craftsmanship, full piano accompaniments, and tasteful musical style. His 1919 piece Song of the Open was highlighted by Upton as representative of American song from the era 1900-1930.”~From Wikipedia

“La Forge was a boy soprano.[1] He first studied piano with his older sister, and went to Vienna in 1900 to study with Theodor Leschetizky. He recorded prolifically for the Victor Talking Machine Company, as both a soloist and accompanist starting in 1906. As a soloist, he recorded works by Chopin, Liszt and MacDowell. In performance he usually accompanied entirely from memory, considered an unusual feat for an accompanist. In his biographyPathways of Song, La Forge claimed that he had ‘a repertoire of over five thousand memorized accompaniments embracing all schools’.[2]

He toured Europe, Russia, and the United States as an accompanist to Marcella Sembrich. La Forge moved to New York City in 1920, where he became a music teacher, coach, and accompanist. He taught a number of important American singers, including Marian Anderson, Lawrence Tibbett, Marie Powers, Emma Otero and Richard Crooks. He served as accompanist for many vocal stars and instrumentalists of the day including Johanna Gadski, Ernestine Schumann-Heink and Margaret Matzenauer.[3] His longstanding musical relationship with Metropolitan Opera soprano Lily Pons from 1937 until his death, saw the production of recital tours with flutist Frank Versaci, down the eastern seaboard and in British Columbia.

Frank La Forge died at the piano, performing at a Musicians Club of New York dinner in Manhattan on May 5, 1953, for which he had been president since 1935.[4][5]”
~From Wikipedia