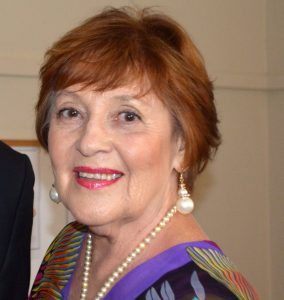 Lorna grew up in Rhodesia and Northern Rhodesia, and despite living in untamed countryside her family had access to 78 RPM records, from which her inspiration and love of singing took root. She and her two sisters all loved to sing and performed as The Gray Sisters for many events, often being likened to The Andrew Sisters. She discovered Christian Science in 1966 and it changed her life and perceptions. In time she raised a family of four in Rhodesia and during the transition from Rhodesia to Zimbabwe she was sought after as a soloist in many genres.

Lorna has sung solos in Christian Science Churches in South Africa, Zimbabwe, the Principia Chapel, and other churches in Africa, the USA, and the UK. She was classically trained in the Bel Canto tradition and has five decades of solo singing in a wide variety of styles and languages. She also had a thriving studio for nurturing local talent, many of whom are on the international circuit. She retired to The Lake District in 2016 where she is a member and Second Reader of Windermere Church. She also sings and plays the piano/organ in Kendal Church once a month.

Lorna studied singing in Zambia at the age of 16 with Dorothy van Essen of the Marchesi School of Singing and also studied 10 years later with Sheila Fox in Rhodesia, who recognized her talent after she won the overall Best Singer Trophy in the local Eistedfodd. Then followed a live recital with the Rhodesian Broadcasting Corporation, after which Lorna was sought after for leads in opera, oratorios, and musicals, and as a soloist in concerts with local orchestras featuring large choral works and, notably, Mahler’s Fourth Symphony (conducted by George Hanson) with the South African National Symphony Orchestra, televised live throughout South Africa. Other appearances were with the Bochum Youth Orchestra in Germany, and also in Bulgaria and at Principia in USA.

After obtaining her performers L.R.S.M. she opened her own vocal studio in Zimbabwe and had a thriving musical life, nurturing many of the young local singers and presenting them in her concerts. She also directed a Viennese Highlights operetta at the local theatre and later launched The Heuglin Tenors, who sang in the Harare International Festival of Arts in 2016, which was Lorna’s last concert appearance in Zimbabwe before relocating to the UK.

"...the bell-like clarity of her tone, the agility of her runs, her excellent breath control and the way in which she projected all the music's moods from inner reflectiveness to radiant jubilation was absolutely compelling in the way it delighted the ear and engaged one's complete response."

"...Lorna Kelly invested the solo soprano line with a tonal purity and inward radiance that must have uplifted many other hearts..."

"...congratulations to you and Fortune for a wonderful recital. It would have done justice to Queen Elizabeth or the Wigmore..."

"[Mozart's Exultate Jubilate] requires a soprano of considerable agility to cope with the opening section and especially the pyrotechnics of the final 'Alleluia' and of equal warmth for the lovely central Andante. Lorna Kelly amply possessed of both these qualities, singing with great control, and gave a stylish and expressive account of the piece with excellent support from the orchestra."

"I have rarely enjoyed a song recital more than this one. The choice of programme, the fine quality of Ms. Kelly's lovely voice and the perfection of her technique added to her friendly, relaxed personal style, and would be hard to equal anywhere."

"Ms. Kelly was particularly successful with the Strauss songs, her clean yet sensuous voice beautifully controlled in 'Morgen', her voice filling the auditorium in 'Zueignung' and the long lines in 'Traum Durch Die Dammerung' effortlessly spun out..."

"...the closing work of the concert was Mahler's Symphony No. 4 in G major conducted by George Hansen. This had the advantage of a remarkably clear and secure soprano soloist in the Finale, Lorna Kelly of Zimbabwe. Her voice, which is under fine control, captured much of the childlike innocence of the music."