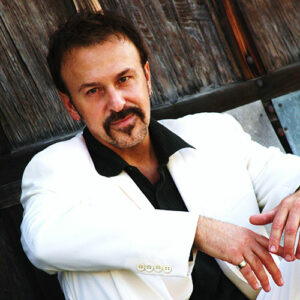 One day when he was four years old, responding to an urge he still can’t explain, Philip Fortenberry knew he just had to play the piano.

“When I sat down at the piano,” Philip recalls, “I immediately started playing music. Songs I had heard before, songs I had in my head, even songs I had not yet heard.”

By the time he was seven, Philip was playing well enough to take over as church pianist when the minister and his piano-playing wife moved away. His father, sitting in church and listening to his seven-year-old son playing like an adult, leaned over to his wife and said, “I guess it’s time to get Philip some lessons.” So they did.

Today, decades later, Philip is still responding to that initial urge… hearing music in his head…feeling it in his bones…expressing it through his fingers almost as if they are following a musical score of their own— unwritten, spontaneous, original.

Philip plays a wide range of genres though his music centers around sacred and new age.

This man speaks to the core of what music really is.

Fortenberry literally played the audience. Gazing at us with slow absorption, he created an improvised "musical group portrait" on the spot. And we sounded gorgeous.

Phil graces our Church Sanctuary every Sunday morning with his piano playing. He is truly inspirational with his talent and his energy on the keyboards. He truly can move an entire congregation through his spiritual gift of music. I have ordered The Woods, and I know that it will be a 5 Star Musical Production.

He is very talented. He really connects with his audience. You can feel his passion as he plays. Enjoyed it very much.

I was a shy teen when asked to sing at a friend's wedding in our tiny little town. She said her cousin, Philip, would be accompanying me on the piano, and that he was the greatest pianist ever and had been playing since he was 3 or 4. When singing at weddings, it could be a nightmare when the pianist played stiffly or without emotion, so I really hoped that she was telling the truth. No singer in this situation can do a song justice unless their pianist is good, and this was only my second time singing in a wedding. Philip was more than good. He was amazing. He made me sound so good, that I received an enough compliments to make me blush profusely. When we finished the first song, he turned around and looked at me and said "That was good, Rhonda. You sounded great." Every girl at the wedding, including myself had a huge crush on him. He was such a gentleman and so talented. We all knew this young man was going places. I've never forgotten what a wonderful experience it was to perform with Philip and feel so thankful that I had a brush with greatness, even for so brief a time.