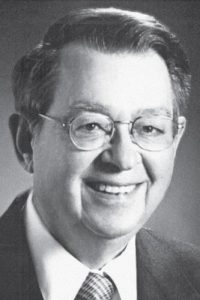 An established composer and musician, Robert J. Powell, BMus., MSM, FAGO, ChM, member of ASCAP, has over 800 titles published. Sacred solo settings are part of that number, and are a blessing to church services: inspiring texts have skillful, sensitive, beautifully written settings.

Robert J. Powell, BMus, MSM, FAGO, ChM, an ASCAP member honored with its Standard Music Award for 35 years (so far), began his career as church organist and musician as the Assistant Organist at the Cathedral of St. John the Divine, New York City, 1958-1960, followed by church organist positions (Director of Music, Organist/Choirmaster, etc.), continuing to the present day. Powell has over 800 works in print for choral, solo organ, handbells, and instrumental ensembles, and he has responded to numerous requests from DARCEY PRESS for organ chorale prelude compositions and sacred solos. DARCEY PRESS has published four Powell collections, as well as including his works in eight other books containing multiple composers. He wrote six hymn tunes for “In Melody and Songs” Hymns from the Psalm Versions of Isaac Watts.

Honored by Louisiana State University as Music Alumnus of the Year, 1989, Powell has served on the Certification Committee of the American Guild of Organists, and as a member of the Choristers’ Guild Board. His compositions evidence great capability in composing style, and great love for the beauty of inspired sacred writings; he supports musically the messages of Spirit.

I first became aware of Robert J. Powell’s solo settings in a volume called “The Solo Psalmist”, and subsequently his 12 solos from the Scriptures, “Sacred Solos by Robert J. Powell”, published by Darcey Press. His songs are fresh and very singable, so I wondered how he might set Mary Baker Eddy’s seven poems which are used as hymns. He agreed to my commission and received ideas from both Adrienne Tindall and me as he completed his settings. I’m grateful to DARCEY PRESS for making them widely available. --Gwen Eagleton, Co-Soloist at The Mother Church

I thoroughly enjoy singing the sacred music of Robert J. Powell. He writes lovely, elegant melodies that are coupled with harmonies that support the vocal line just enough but also challenge the singer. I particularly like the harmonic colors in his "Beloved, Let Us Love One Another" and in "He That Dwelleth in the Secret Place (Psalm 91)"; his modulations create a wonderful sense of being lifted up. He is skilled in matching the rhythm to the word syllabification, so that the words flow smoothly. I also appreciate his ability to use word painting in his accompaniments, especially evident in his "For As the Rain Cometh Down"; the sound of rain falling makes the listener experience the words in a deeper way. I am very grateful to have this music in my repertoire and to have the opportunity to present these fresh settings of sacred texts to my church community. -- Susan Lundholm, Professional Singer, Soloist at First Church of Christ, Scientist, Libertyville, IL

It is a great pleasure for me to work on the songs of Robert J. Powell. The music has been written with great inspiration by the hand of a Master. Comfortable for the piano player, always laying under the fingers in a very natural way. Powell has a gift of melody, and his harmonic language is pure; his music always comes from the poetic image of the text and makes it more rich and deep. Music by R. Powell continues the best tradition of world classical music. -- Lioubov Zintchenko, Glenview, Illinois

“Bob if I send you some scriptural texts, would you write solos for them?” “Dear Bob: would you consider a new project, New Songs for New Singers? Four composers writing solos with “young” voices in mind....” “Bob, for the Musical Gift series, would you write variations on NEW BRITAIN and O WALY WALY, and..., and .....?” “Dear Bob: I’m working with Isaac Watts texts, and need new hymn tunes to set them....” My requests were honored beautifully and quickly. And now: “Bob, let us offer some of your solos for download through WATCHFIRE MUSIC!” For digital download, DARCEY PRESS is proud to present some of Robert J. Powell’s sacred solos. --Adrienne Tindall, dba DARCEY PRESS, Vernon Hills, IL