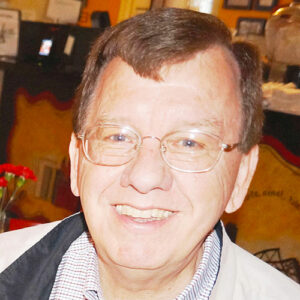 Terry’s formative years were spent in small-town Oklahoma before moving on to study music at the Universities of Oklahoma and Illinois and to teach in suburban Chicago, LaCrosse WI, Tucson AZ, Emporia KS, and now Kansas City. He loves all types of music, especially classical. His favorite pastimes include reading, working with choirs, playing piano, and traveling.

Adjunct Professor of Music at the Conservatory of Music and Dance at the University of Missouri-Kansas City, Terry is editor of and contributor to his own choral music series published by Santa Barbara Music. He’s author of “Strategies for Teaching Junior High/Middle School Male Singers—Master Teachers Speak” (Santa Barbara Music) and co-author of “The Boy’s Changing Voice—New Solutions for Today’s Choral Teacher” (Alfred Music). He earned advanced degrees in music from the University of Illinois and the University of Oklahoma. He has conducted honor/festival choirs and presented workshops on the boys’ changing voice in 22 states. During his 23- year tenure at Emporia State University (KS), his choir toured Europe seven times. He has found an exciting and rewarding niche as a composer of inspirational music for soloists. Terry is listed in Who’s Who in American Education, Who’s Who Among America’s Teachers, and Who’s Who in America. Currently, he resides in Kansas City, Kansas with his wife, Sue.

“I love singing the solos you write.” (Judy B., Kansas City, MO)

“The music you write for our church services should be published.” (Pat D., Kansas City, MO)