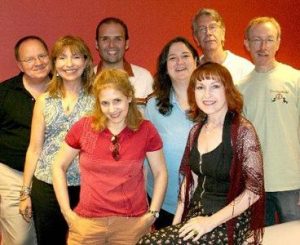 The Accidentals are known for their sophisticated harmonies, off-beat humor and an eclectic repertoire of original songs and distinctive arrangements. These inspirational music artists, with their unique mixed-voice octet have won numerous awards (National Harmony Sweepstakes Championship, 3 New York MAC Awards, Back Stage Bistro Award, 3 Contemporary A Capella Awards). And their CDs have met with wide acclaim from the a capella community and international radio audiences.

Their songs have been included on the soundtracks of feature films and major network TV shows. The professional credits of group members include the record industry, Broadway and regional theater, poetry, education, art, commercials, industrials, nightclubs, major concert venues and arena tours.

A unique mixed voice octet, The Accidentals are known for their sophisticated harmonies, off-beat sense of humor, and eclectic repertoire. With their original songs and distinctive arrangements, they have won many awards, including MAC Awards and Back Stage Bistro Awards, all awards for Best Vocal Group, and were the 1995 National Champions of the Harmony Sweepstakes. Their CD’s have won several Contemporary A Cappella Recording Awards, and songs from their CDs have been included in feature films and on television.

The best a cappella group in America

The best and most interesting a cappella group I have seen in years. Their homage to cult rotten film director Ed Wood, Jr. is just one example of what makes them unique....inspired

They are a vocal orchestra!... they sing some of the most complex arrangements in all of acappelladom... prepared to be blown away...great sense of humor...You'll laugh, you'll cry, it's beautiful, it's funny, you'll be beguiled by one of the best a cappella albums of the new millennium!

If you think a cappella choristers are inherently square, think again. This group's irreverent sense of humor inspired Denis Leary to feature them in his Merry F#$%n' Christmas Special on Comedy Central.

There is something special about the human voice that a musical instrument can try to emulate or even manage to enhance, but never duplicate. [...] The lack of instrumental accompaniment was amply swept out of mind by the ingenuity of the arrangements that orchestrated the eight voices into an effervescent symphony of sound.

Not only are the arrangements as assonant as raindrops on leaves, but their material is startlingly original

There’s nothing accidental about THE ACCIDENTALS. Every breath they take and every tone they emit is exquisitely coordinated to create a smooth symphony of sound ... They combine harmony with humor and a slightly off-center perspective ... No matter what the song, this group can handle it. ... The Accidentals blend their individually-distinct voices and bring forth sounds that would give any orchestra a run for its money. - Laurie Lawson (online review)

See All Songs by The Accidentals
Artists