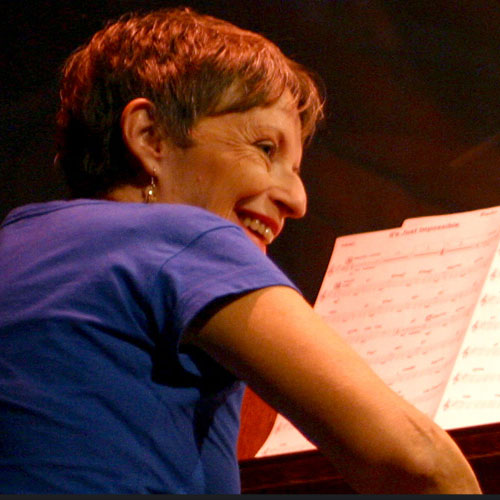 Back in the 1950s, Amy Duncan was a little country girl in Connecticut who loved jazz and whose big dream was to be “the world’s greatest jazz pianist.” Well, that never happened, but she did work very hard at the piano and began to play professionally at age 15. Amy went to college at Boston University, but dropped out after a year and a half and spent many years playing jazz in small groups around the city. Later on she moved to New York where she formed her 10-piece band Brass Tacks in 1985 as a vehicle for her music writing. Somewhere along the way she managed to squeeze in 12 years as pop music critic for The Christian Science Monitor, raise two daughters, and then, because of her love for Brazilian music and culture, moved to Rio de Janeiro in the 90s. Amy spent five years parading as a drummer in Rio’s famous Carnival, and then was finally able to put together the Rio version of Brass Tacks. They played in clubs and theaters in Rio and toured cultural centers in São Paulo. In 2002 they recorded their first CD, “My Joy,” which consists entirely of Amy’s compositions and arrangements. Amy has also written and published her autobiography, Getting Down to Brass Tacks – My Adventures in the World of Jazz, Rio, and Beyond.

Amy Duncan’s autobiography, Getting Down to Brass Tacks – My Adventures in the World of Jazz, Rio, and Beyond, has been called a “page- turner” —it’s a sometimes wild and hairy, sometimes poignant and moving, often humorous and always honest and gritty journey through her life.