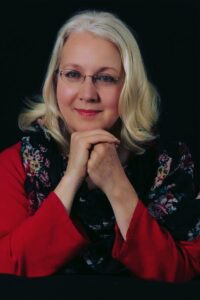 Carol Crowder Phillips was raised in a musical family, and began playing the piano and composing at a very early age, and playing the violin at age 6. She began teaching piano at the age of 12, and violin soon after. She earned a Bachelor’s of Music Education degree from Oklahoma State University; taught music in Nairobi, Kenya as a Peace Corps volunteer; and has worked professionally as a violinist, pianist, organist, and singer. In 2005, she added the kinnor—a 10-string harp (a King David’s Harp)—to her instruments of performance and composition.

In 2010 she was one of three winners of the a cappella Psalm composition contest for Ascending Voice II, an international symposium of sacred a cappella music, at Pepperdine University, in Malibu, California.

In 2008 she took the course: The Geographical and Historical Settings of the Bible at Jerusalem University College in Israel; and in 2011 studied Ethnodoxology at Ouachita Baptist University in Arkadelphia, Arkansas.

Her compositions have been performed throughout the United States and in Kenya. Her compositions are influenced by a wide diversity of musical and cultural experiences. The majority of her work is setting scripture and spiritual texts to music. She has also composed for a variety of solo instruments, small ensembles, big band, and choirs.

Carol currently lives and composes in Vancouver, WA, bringing scripture and poetry to life in song.