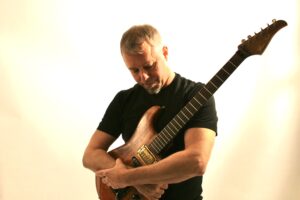 Chieli comes from a musical background. His father, Ulpio Minucci (concert pianist/composer) wrote the American songbook standard, and 1955 hit song, “Domani” (sung by Julius LaRosa as well as Bing Crosby), as well as “A Thousand Thoughts of You,” and “Felicia” (both sung by Nat King Cole).

Also known as a composer for television and film, Minucci has won three Emmy Awards, in 1998, 2007, and 2008, and in addition has been nominated for 10 Emmy Awards for his eclectic compositional work on CBS’s “The Guiding Light”, which holds the record as the longest running TV show in American history. He has written music for well-known programs such as Dancing With the Stars, American Idol, Good Morning America (theme), Bloomberg Radio (theme), Access Hollywood, The 700 Club, and others. He also contributed music to the soundtracks of Bowfinger (1999 Universal), Legally Blonde (2001 MGM), and Panic (2000 Artisan).

Minucci composed and produced the soundtracks for the Broadway Across America/Nickelodeon live stage productions of the international hit TV series, Dora the Explorer (Dora’s Pirate Adventure, The City of Lost Toys, and Return to the City of Lost Toys), all of which toured. He also wrote and recorded original songs for the live stage production of Thomas & Friends Live™, (both Thomas Saves The Day! and A Circus Comes to Town). Most recently he has contributed to the score of Peter Pan 360 (Herrick Entertainment/Threesixty Entertainment), which premiered in June of 2015.