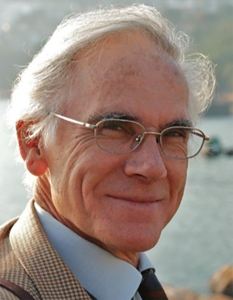 John F. Wilson’s music was written during a long career as a government lawyer in many parts of the world.  The main body of his music consists of sacred solos for use in church services, originally published as ‘Sermons in Song’. The nearly 50 songs are rich and diverse in style, including influences from the Caribbean and China and English folk song. Although sometimes quite complex harmonically, they can be performed by players of average ability and have been used in church services in many countries. The vocal line is tuneful and direct, and the accompaniments, though sometimes using modern harmonic idioms and unusual transitions, always reflect the words.

John’s solos use verses from the Bible, including the Beatitudes, the 23rd Psalm and the Lord’s Prayer, poems published in the Christian Science periodicals, poems by Mary Baker Eddy, and some of his own lyrics.  Most of the songs are solo settings, but there are a few vocal duets and some with instrumental obbligato.

John Wilson obtained a law degree from Oxford University and practiced as a barrister for some years in Birmingham, England, before going overseas in 1976. He was Attorney General of Tuvalu during its independence, and then Attorney General of Montserrat. He spent 15 years as a legal officer in the Hong Kong Government both before and after the transition to Chinese sovereignty. He has since worked as a law drafting consultant for small jurisdictions in the Pacific, the Caribbean and the Atlantic.

John learned the piano at an early age and taught himself to play the organ for Christian Science church services. He has been involved all his life in music-making as a choir member, accompanist and organist. In addition to the vocal solos published on the Watchfire Music website, he has composed Hymn Tune Interludes intended for use in church services and based on hymns in the 1932 Christian Science Hymnal, and miscellaneous music for choirs and instrumental groups. John is a committee member of the Northampton & District Organists’ Association in  England and former member of the Northampton Composers’ Association and is active in his local Christian Science church.

The title ‘Sermons in Song’ is derived from a phrase in Science & Health by Mary Baker Eddy (p.234): “Whatever inspires with wisdom, Truth, or Love — be it song, sermon, or Science — blesses the human family with crumbs of comfort from Christ’s table, feeding the hungry and giving living waters to the thirsty.” It also echoes the line from Shakespeare, “Sermons in stones, and good in everything.”  John hopes that his solo songs will inspire with wisdom, Truth and Love and that you will enjoy exploring this special catalogue of sacred solos for use in church.