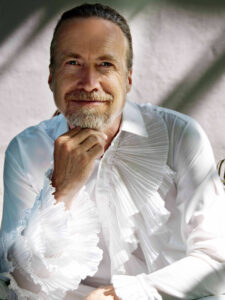 For John Jones, composing spiritual songs is the most recent activity within a rather colorful musical career that began in Berlin, Germany as the lead singer of a performance art group called Fuzzy Love. Over the years, Jones reinvented himself both musically and spiritually. In a Serbian Orthodox choir, he regularly sang the music of Stevan Mokranjac, whose liturgical compositions compelled Jones into a conscious recognition of metaphysical reality. After moving to Nashville, Jones affiliated with Christian Science and became a church soloist. He soon began to compose the Bible-based songs himself – in English and later in German.

Educated as a filmmaker but self-taught as a performer and composer, he has juggled two very different musical identities and has come to know that musical tastes and spiritual understanding are very fluid things, best kept vibrantly alive and unfolding, as there are always new ways to celebrate truth and beauty. He suggests that while he may not always appear to be the simple, pious man he knows himself to often be, it is with great faith that he continues to create all kinds of music in various contexts – to express the joy he knows has but a single source.