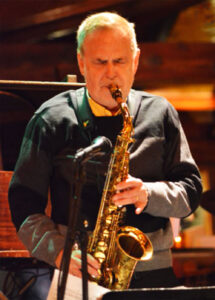 Although Kim Richmond is primarily known as a jazz saxophonist, his original, and very much studied, classical instrument is the clarinet. Based in Los Angeles, he works as a freelance musician, doing studio work, shows, concerts, clubs and other venues. His reputation also includes being a composer and arranger He was nominated for two Grammy’s for his CDs “Artistry” and “Refractions.” He is a member of the classical chamber orchestra Composers Ensemble of Los Angeles (CELA), plays regularly with the Pacific Symphony, and has performed as soloist with that orchestra, the Dallas Symphony, Riverside Symphony and others.

Kim has released eleven recordings as a leader and is on a myriad of others. He also is quite active in the educational arena, being an associate professor at USC and teaching at a variety of summer music camps each year.

Whatever his mode of expression, be it instrumental performance, composition, arranging and conducting, Kim Richmond is striving to express a uniquely original voice, combining his extensive experience with the new sounds of our evolving musical world.