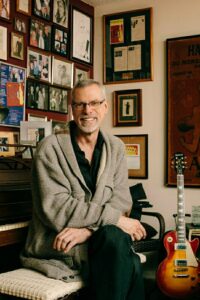 Raised the son of “a preacher and a nurse” from Arkansas, Steve Schalchlin (pronounced Shack-lin) was playing for his “daddy’s” church from the age of 10. Now a New York based composer and lyricist, Schalchin’s work has won many prestigious awards from coast to coast, especially his two off-Broadway musicals with partner Jim Brochu, a New York Drama Desk Award-winning playwright and actor. Steve Schalchlin combines his instinctive understanding of congregational singing with the healing power of music in clever, real world storytelling songs, honed in theaters, schools, colleges, universities, cabarets and concert halls all over the world. He is currently a resident composer and soloist at Christ Church Episcopal, Bay Ridge, New York, collaborating and studying with conductor/composer/arranger Mark Janas, who conducted for Leonard Bernstein.