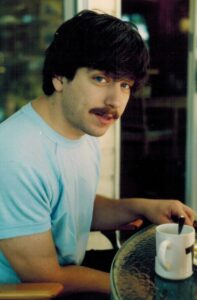 A west side New Yorker, Jon grew up alongside a mix of cultures and ethnic groups thrown together in a true melting pot of aspirations. Inspired by his family’s love of music and art, he found himself orchestrating music to the actions of toy soldiers at a very young age. Jon took lessons for Piano with various instructors who could never overcome his inattentiveness and distracted nature. But that never stopped him from writing and singing and playing music. He was raised to be aware of the cultural, political and critical issues that surrounded us all in the 1960’s. He can’t completely separate himself from those issues that seem to still plague us still. They are part of his Bio and reflect who Jon has become and the music he writes.

Jon has practiced dentistry for the past 36 years in the same location at Columbus circle and Broadway in NYC. Considering that patients are not completely spared an entire visit without hearing one of his newest songs, technically, makes him the longest running Broadway show. Dr. Goldenthal lives just outside NY with his wife of 37 years, and has three grown sons and a new grandchild.

Let's stay in touchSubscribe to our newsletter
Newsletter Signup